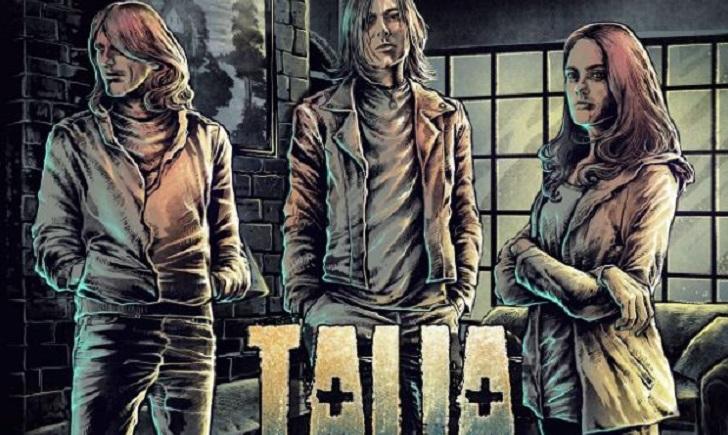 Paris, France three-piece ensemble, TALIA, has brought back to life a 90’s Alternative Rock/Grunge explosion that reminds us of dark and dire times over their latest release entitled, ‘Thugs They Look Like Angels’. The album kicks off with lead single, “American Bride”, that although isn’t particularly mixed and mastered to it’s potential, stands out from the redundant slog of bands attempting to bring back the 90’s movement that changed the course of music. Passion is a prominent factor that invigorates the album’s opener and the emotion that is leaking from lead singer Nicolas Costa’s core is captivating in its essence for its unique talent and craft.
Between the raspy vocals and doleful lyrics over the album’s second track, “Play Dead”, the influence of cheap thrills and quick-tempered actions is reminiscent of Fuel’s first full-length album, ‘Sunburn’, which then keeps listeners on their toes and twists right into the highly energetic third track, “It’s been oh so long”. If you’re a fan of Green Day within their ‘Dookie’ prime, then TALIA’s fifth track, “Self Induced Fever”, has the raw and angsty kick that will take you on a trip back in time to the days when music was seemingly sublime and full of melodramatic rage. Combining the best elements of lyrical philosophical musings and the nitty-gritty of Alt Rock, the album’s most standout track, “High Strung”, leaves listeners questioning the opinions that society subconsciously creates of passer byes and how they can leave oneself ill in mind and living a life furthest away from the truth.
‘Thugs They Look Like Angels’ slows down with an acoustic feel over ‘The Flood’ which is the perfect track for a night after a breakup with a shot (or four) of whiskey at your local hole in the wall. Throw on your flannel shirt and get ready for a closer, “Bounty Killers, that covers a wide landscape of styles and auspicious lyrics that relationships in a state of flux crave. TALIA has an incredible consistency over ‘Thugs They Look Like Angels’ that makes their discography worth listening to.
http://www.tattoo.com/blog/talia-thugs-they-look-angels-review
Article précédent
Article suivant
Copyright © 2022 Talia Rock. Proudly powered by WordPress. BoldR design by Iceable Themes.